The Grammy-nominated singer, who’s currently on his “Twelve Carat” tour, suffered a rib injury onstage Saturday during a concert in St. Louis, Missouri. The singer fell after tripping on a hole in the stage, according to fan video of the performance shared on social media.

According to TikTok user Kelly Manno, who attended the concert, Malone appeared "too hurt to even get off the stage."

After "about 8 to 10 minutes, they were able to get him up and help him off stage," the TikTok user added.

Despite the hiccup, Malone ultimately didn’t miss a beat. Malone returned to the stage, "apologized to the crowd for ruining the show" and then "someone hands him a beer, he takes a big swig of it" and finished his setlist. 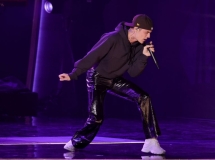