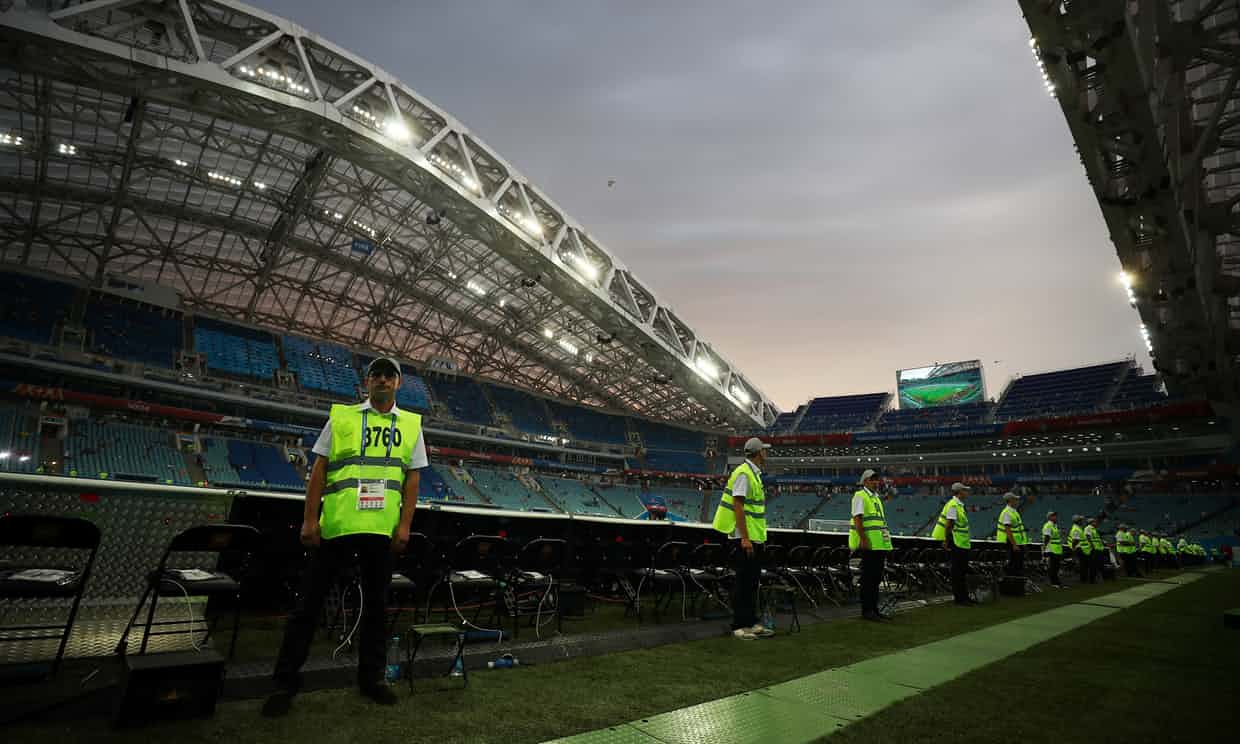 The potential for racism during the World Cup has been one of the most pained issues in the build-up to the tournament, with the track record of Russian crowds worrying many players. England’s Danny Rose has told his family not to travel to Russia to watch him play, citing fears for their safety.

Russian football officials, on the other hand, believe their country has been unfairly smeared as racist by western media and players. But no amount of obfuscation can hide the fact that the game in Russia has a longstanding problem with racist chants and taunts, as well as a history of officials dismissing racism allegations out of hand.

On Saturday, Nigeria take on Croatia in the Baltic city of Kaliningrad, the first match involving a team from sub-Saharan Africa. Fifa has introduced a new system for the World Cup, in which a team of observers at every game will report any incidents to officials, who will have the power to stop games if necessary.

So far, the atmosphere has been festive, with fans from across the world mingling in central Moscow until the early hours in the days before the tournament kicked off. On Friday, the first Nigerian fans arrived in Kaliningrad, and reported no issues so far.

“Of course the racism issue was at the back of my mind,” said 29-year-old Anthony, who has tickets to all three Nigerian group games, and was watching Uruguay v Egypt in Kaliningrad’s Fan Zone on Friday afternoon. “But I just decided to keep an open mind and so far everything has been great and people have been incredibly friendly.”

“Of course the racism issue was at the back of my mind,” said 29-year-old Anthony, who has tickets to all three Nigerian group games, and was watching Uruguay v Egypt in Kaliningrad’s Fan Zone on Friday afternoon. “But I just decided to keep an open mind and so far everything has been great and people have been incredibly friendly.”

“We all are sure that there will not be any problem for the Nigerian players because the atmosphere we felt in arriving in Russia was very good,” said Nigeria’s German coach Gernot Rohr at his pre-match press conference on Friday evening.

Captain Mikel John Obi, who has a Russian girlfriend, said the team had been given a warm welcome at its training base in Essentuki, southern Russia. “Everybody has been really nice. I think in the hotel, even in the camp where we are, it’s been really, really amazing. The Russian people have been very nice to us, a lot of Russians seem to support the Nigerian team.”

Russian officials have a history of not taking racism seriously, say rights campaigners. Alexei Sorokin, the head of Russia’s World Cup organising committee, said in 2010 that a banana banner taunting Peter Odemwingie, a Nigerian-Russian player, was not racist. Alexei Smertin, appointed as the Russian football union’s anti-racism inspector, appeared to make a mockery of his role in 2015 when he said there was no racism in Russia and that bananas thrown at black players were done so for “fun”.

Racist incidents and banners have actually been on the rise in Russian football over the past year, a recent report found. Fans have sung chants about monkeys and bananas, and banners with far-right symbols have been spotted in stadiums.

As the World Cup drew closer and the Russian authorities realised that the issue could not simply be laughed off, they started to take action, fining clubs over racist incidents. But there is still doubt about the level of punishment, with fines typically symbolic and players or coaches who react to racist abuse receiving two-match bans.

There is some evidence that the situation in Russian society at large is improving: violent attacks on black foreigners have been on the wane over the past decade, and some black residents of Moscow say the main issue now is outdated attitudes rather than racial hatred.

“The vast majority of Russians are not racist,” said long-term resident John Mann, an African American. “People here don’t always have the same cultural framework for what is or isn’t politically correct to say, but most of the time it’s without malice.” Mann said he had experienced more genuinely racist incidents in the US or on visits to Britain than he had in Moscow.

Some racist incidents in Russia may be born out of ignorance but still appear shocking, such as Russians parading in blackface before a Cameroon match in the Confederations Cup last year, or Spartak Moscow tweeting a video of black players training with the caption: “See how chocolates melt in the sun”.

Vladimir Putin and the Russian authorities have made repeated statements that the 2018 World Cup will provide a chance for foreigners to discover Russia, but rights campaigners hope the process will be a two-way street.

“The 1980 Olympics opened up Russia and the opinions of Muscovites in general. I hope it will be a two-way street and people will become more open,” said Pavel Klymenko, of the anti-discrimination network Fare. “Some racist incidents are organised by the most hardcore fans, but some are just a result of ignorance.”

Federico Addiechi, Fifa’s head of sustainability and diversity, said there were several steps before stopping a game if racist incidents were observed, including removing individual offenders and making announcements over the stadium Tannoy. In extreme cases, players will be taken off the pitch by the officials.

admin  10:43 SA 16/06/2018
Share:
x ‘We have to keep calm & win’: Messi feels ‘hurt’ but focused after bitter draw with Iceland
The 3 best moments of the World Cup so far... and they are all Ronaldo
We are using cookies to give you the best experience on our website. By continuing to browse, you are agreeing to our Cookie Policy.
You did not use the site, Click here to remain logged. Timeout: 60 second