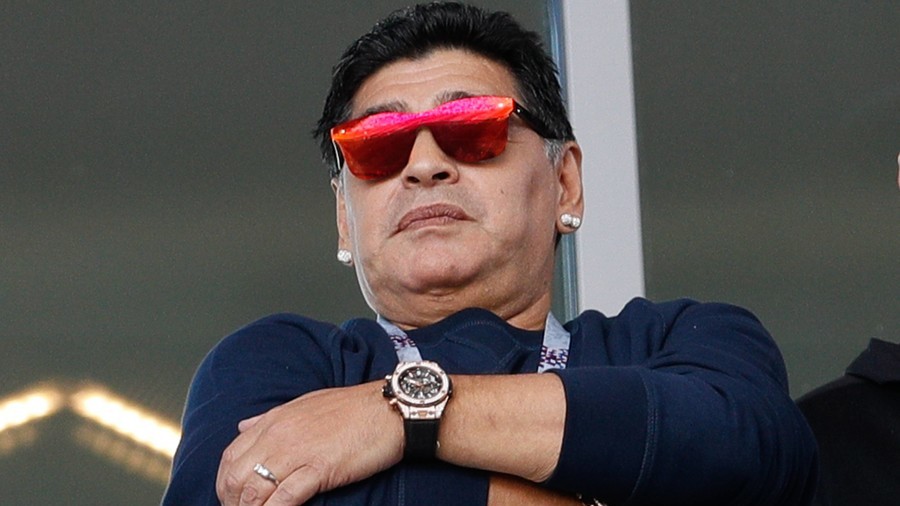 BC reporter Jacqui Oatley had tweeted that the World Cup winner had made a ‘slit eyes’ gesture toward South Korean fans at Argentina’s match against Iceland at Spartak Stadium.

Maradona not so cool now. Some South Korea fans just shouted “Diego” and he obliged with a smile, kiss and wave. Then pulled his eyes to the side in a clearly racist gesture. All of us who saw it are stunned.

However, Maradona has rejected claims of racism, saying that he was merely thanking the Asian fans for supporting South American giants Argentina.

He wrote on Facebook:“I understand better than anyone that in the World Cup people are looking for news everywhere, but I want to be clear with this: today, in the stadium, among so many demonstrations of affection from the people, I was struck by a group of people around a fan who filmed us, an Asian boy wearing an Argentina T-shirt.

“I, from afar, tryed to tell them how nice it seemed to me that even the Asians cheer for us. And that's all, guys, come on.”

The controversy didn’t end there for Maradona, as the 1986 World Cup winner was forced to apologize for puffing on a cigar at the game – despite smoking being banned at all World Cup stadiums.

Today was a difficult day for the Argentines, with a lot of tension in our debut in the World Cup. Everyone has their way of feeling things. I honestly did not know that no one can smoke in the stadiums. I apologize to everyone and the organization. Come on Argentina, let's support our guys, now more than ever! - - - - - - - - - Hoy fue un día complicado para los argentinos, con mucha tensión por el debut. Cada uno tiene su forma de ser y de sentir las cosas. Sinceramente no sabía que no se podía fumar en el estadio, pido disculpas a la gente y a la organización. Vamos Argentina, vamos nuestros muchachos, ahora más que nunca!!!


I honestly did not know that no one can smoke in the stadiums," he wrote."I apologize to everyone and the organization. Come on Argentina, let's support our guys, now more than ever!"

Argentina suffered a frustrating opening World Cup encounter with Iceland, settling for a 1-1 draw despite taking the lead in the 19th minute through Sergio Aguero.

World Cup debutants Iceland – the smallest nation ever to appear at the tournament – equalized just four minutes later, while Lionel Messi blew the chance to restore Argentina’s lead when he missed a second-half penalty.

Argentina next face Croatia in Nizhny Novgorod on Thursday, before playing their final group stage game against Nigeria in St. Petersburg on Sunday.

admin  11:43 SA 17/06/2018
Share:
Mexico 1-0 Germany: 'Chucky' goal topples reigning champions at raucous Luzhniki
Captain Kolarov free kicks Serbia to 1-0 victory over Costa Rica
We are using cookies to give you the best experience on our website. By continuing to browse, you are agreeing to our Cookie Policy.
You did not use the site, Click here to remain logged. Timeout: 60 second