×
Wednesday - 28/09/2022 06:09 Author: Editors Desk Source: BBC News:
Cuba is completely without power after Hurricane Ian pummelled the western end of the island, its government has announced.

The electrical system is experiencing total collapse, officials said, after one of the main power plants could not be brought back online.

Two people were reported dead and buildings were damaged nationwide.

The category three hurricane, packing wind speeds of up to 195km/h (120mph), is now bearing down on Florida.

On Cuban state television on Tuesday, the head of the electrical energy authority announced that an island-wide blackout had occurred as a result of the national electrical system's breakdown, leaving 11 million people in the dark.

A journalist with a state-run news agency reported that 100% of the electrical circuits in the country were out of service and that "the Antonio Guiteras thermo-electric power plant… could not be synchronised".

Based in Matanzas, 100km east of the capital Havana, Antonio Guiteras is the most important energy plant in Cuba. Its shutdown means there is currently no electricity generation anywhere on the island.

The owner of the famous Finca Robaina cigar producer posted photos on social media of the havoc wreaked by the hurricane in the tobacco farms.

"It was apocalyptic, a real disaster," wrote Hirochi Robaina.

Forecasters had warned that some regions of Cuba could see up to 30cm (12in) of rain under Hurricane Ian.

Mayelin Suarez, a resident of Pinar del Rio, said Monday night, when the storm hit, was "the darkest of her life".

"We almost lost the roof off our house," she told Reuters. "My daughter, my husband and I tied it down with a rope to keep it from flying away."

Cuban President Miguel Diaz Canel visited the province and vowed that it would rise "above adversity", the Cuban presidency tweeted. 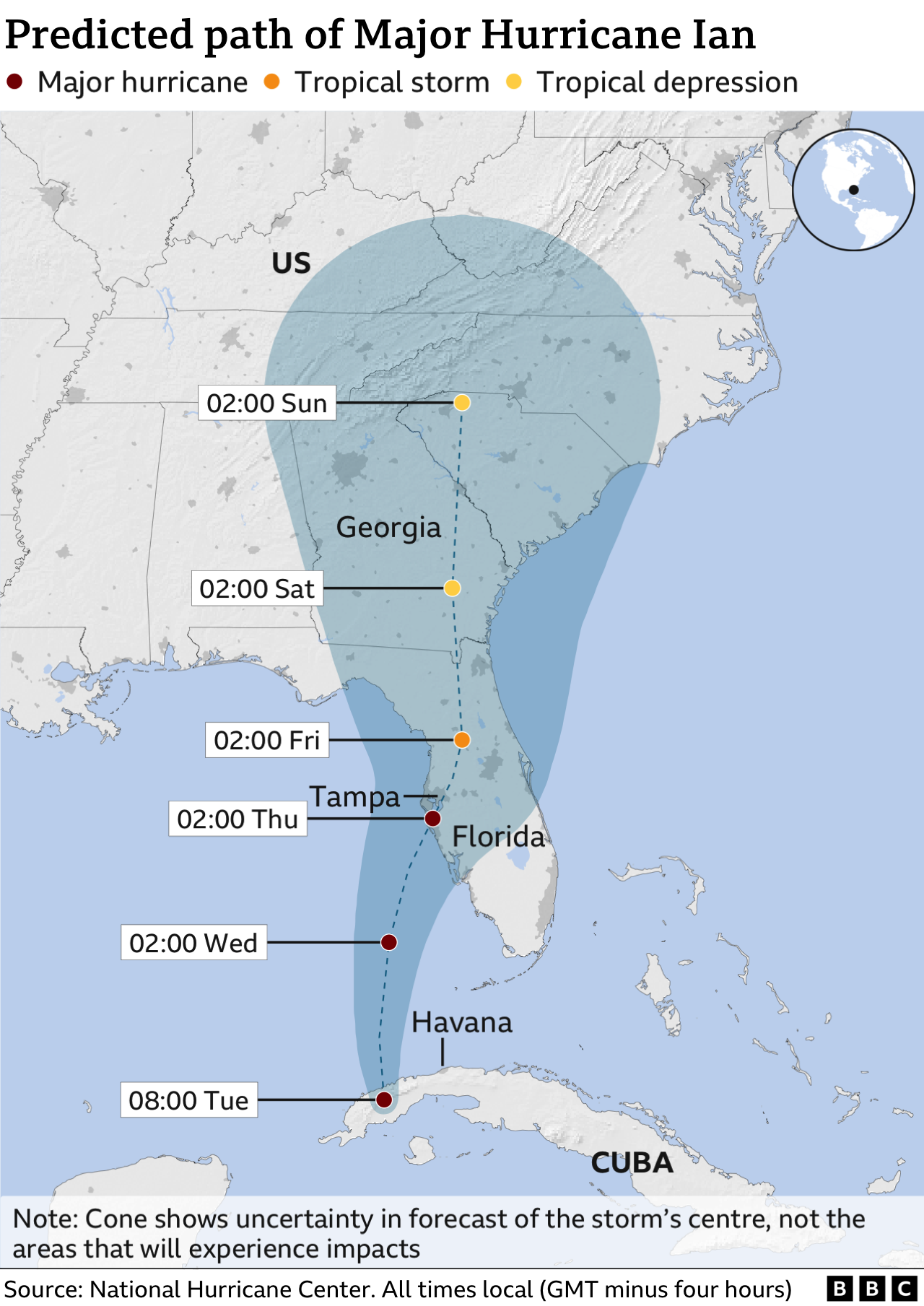 A 43-year-old woman in the province was killed after the walls of her home collapsed. A farmer in the town of San Juan y Martínez was electrocuted while trying to shut off a wind turbine used for irrigation, the New York Times reported.

The hurricane has been gathering force in the south-eastern Gulf of Mexico after leaving Cuba, says the US National Hurricane Center (NHC).

On Tuesday night the storm was passing over the Florida Keys, a string of islands off the southern tip of the state.

It is projected to make landfall on Florida's west coast late on Wednesday.

The NHC says that Ian could be a category four hurricane by the time it strikes Florida's western coast, with wind speeds topping 130mph. Some 2.5 million people in Florida are under evacuation orders.

Florida Governor Ron DeSantis warned in a news conference on Tuesday that the storm is "the real deal".

He declared a state of emergency for all of Florida over the weekend and has activated 5,000 National Guard troops.

The Tampa area could receive its first direct hit from a hurricane since 1921, officials say, and might see 3m (10ft) of storm surge along the coast.

Meteorologists have said flash flooding is possible in the Florida peninsula and Florida Keys as the hurricane approaches.

The neighbouring state of Georgia has also declared a state of emergency and placed 500 National Guard troops on standby.


The White House has made its own emergency declaration, which will help federal and state officials co-ordinate disaster relief and assistance.

President Joe Biden, a Democrat, spoke with Gov DeSantis, a Republican, on Tuesday evening, and the two committed to "continued close co-ordination", the White House said.

The Caribbean is still reeling from the effects of Hurricane Fiona, which tore through the region last week.

Moving northward to parts of the Atlantic Canada coastline and eastern Quebec, Fiona claimed two lives, washed homes into the sea and downed power lines over the weekend.

Former Brazilian president Jair Bolsonaro has applied for US visa

Brazil's former president Jair Bolsonaro has applied for a six-month US tourist visa, his lawyer has...